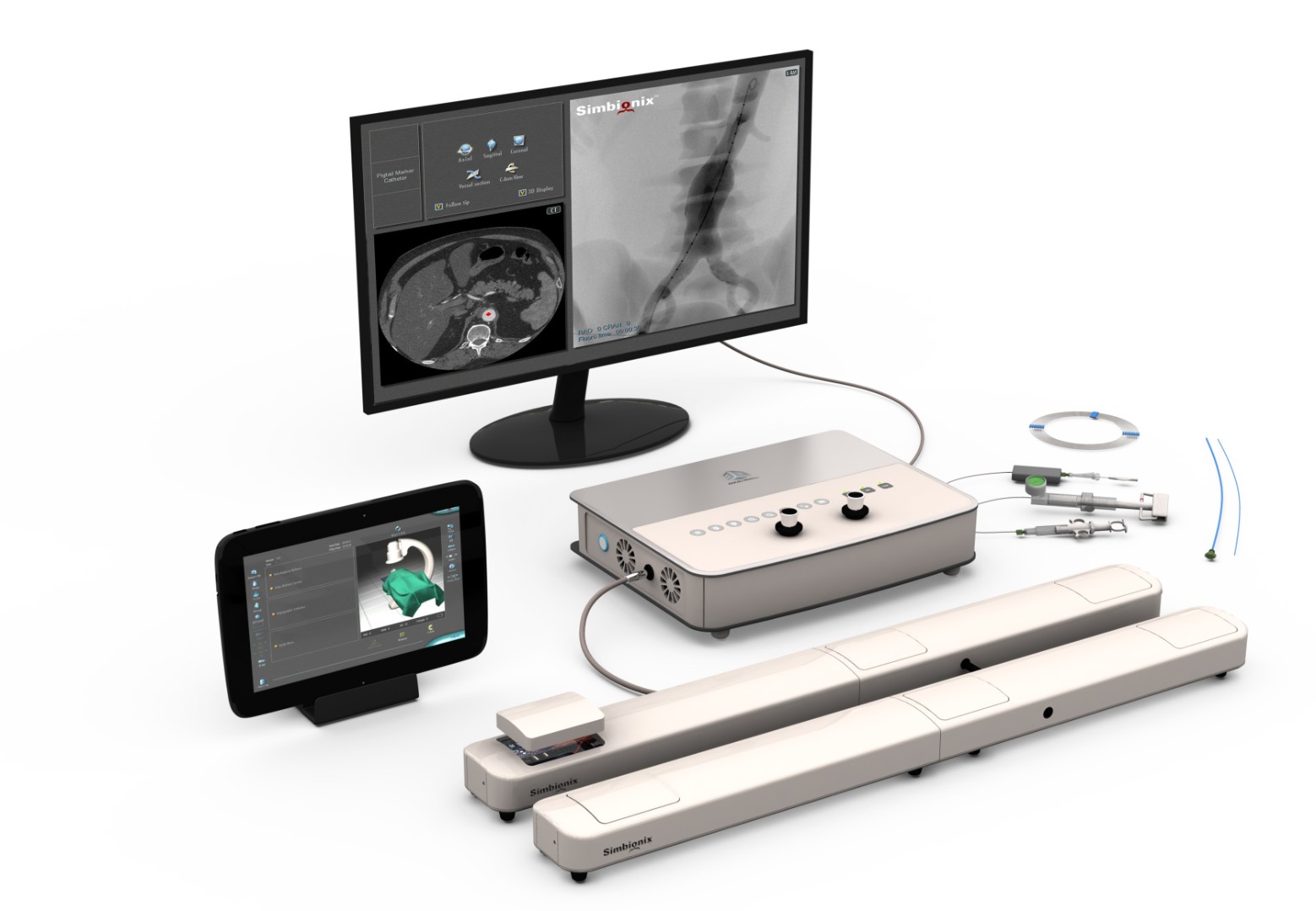 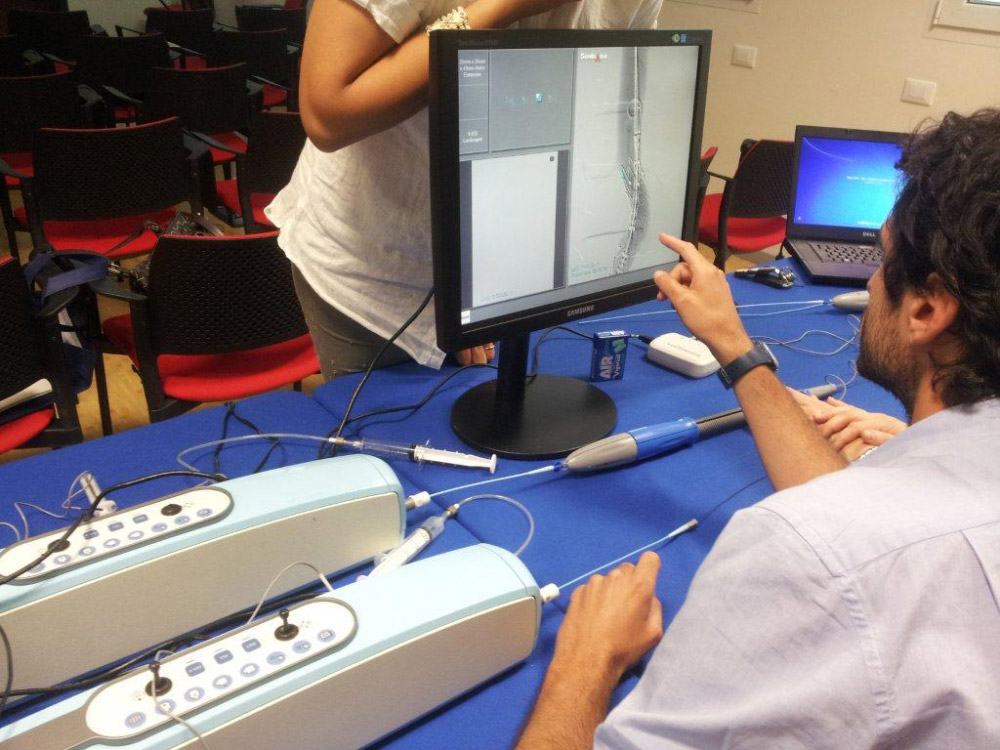 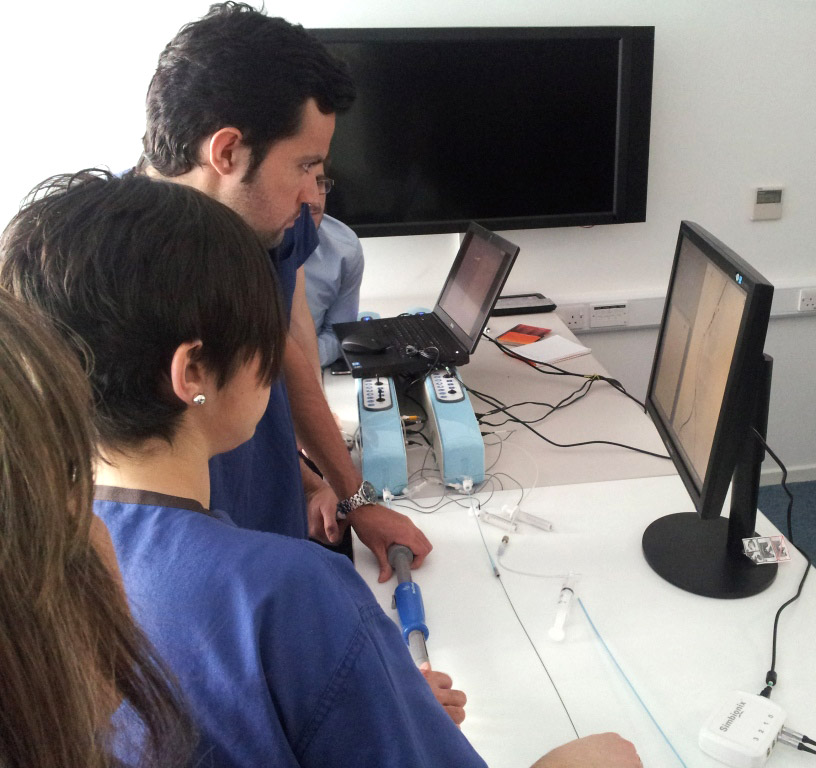 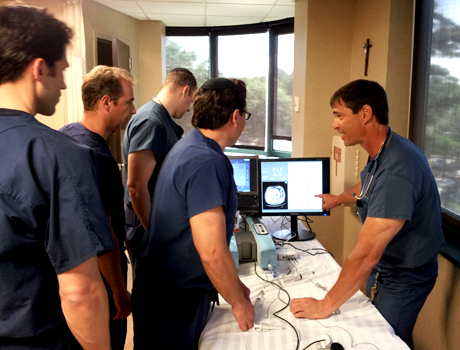 OBJECTIVE: Simulation may be a useful tool for training in endovascular procedures. The aim of this study was to evaluate the effect of endovascular repair of abdominal aortic aneurysms (EVAR) simulation in boosting trainees’ learning curve.

DESIGN: Ten vascular surgery residents were recruited and divided in 2 groups (Trainee Group and Control group). At a first session (t0), each resident performed 2 simulated EVAR procedures using an endovascular simulator. After 2 weeks, each participant simulated other 2 EVAR procedures in a final session (t1). In the period between t0 and t1, each resident in the Trainee Group performed 6 simulated EVAR procedures, whereas the Control Group did not perform any other simulation. Both quantitative and qualitative performance evaluations were performed at t0 and t1. Quantitative evaluation from simulator metrics included total procedural time (TP), total fluoroscopy time (TF), time for contralateral gate cannulation (TG), and contrast medium volume (CM) injected. Qualitative evaluation was based on a Likert scale used to calculate a total performance score referred to skills involving major EVAR procedural steps.

OBJECTIVE/BACKGROUND: This study aimed to determine the cost-effectiveness of a PROficiency based StePwise Endovascular Curricular Training (PROSPECT) program, including e-learning and hands on virtual reality simulation.

RESULTS: Fifty-eight peripheral endovascular interventions, performed by 29 surgical trainees (three dropouts) were included in this RCT from October 2014 to February 2016. Annual costs from the perspective of the hospital were €6589 for curriculum design, €31,484 for implementation, and €1143 in operational costs. Per trainee, simulation based training until proficiency cost €3806. In comparison, if endovascular proficiency levels were obtained with conventional training only, this may have cost €5001 per trainee.

CONCLUSION: Simulation based training in endovascular procedures may be cost saving, because training occurs outside the angiosuite. It is possible that cost savings are underestimated as, in contrast to the literature, prevented costs related to complications could not be defined.

BACKGROUND: Endovascular aneurysm repair (EVAR) requires a high-level of technical-competency to avoid device-related complications. Virtual reality simulation-based training (SBT) may offer an alternative method of psychomotor skill acquisition; however, its role in EVAR training is undefined. This study aimed to: a) benchmark competency levels using EVAR SBT, and b) investigate the impact of supervised SBT on trainee performance.

METHODS: EVAR procedure-related metrics were benchmarked by six experienced consultants using a Simbionix Angiomentor EVAR simulator. Sixteen vascular surgical trainees performing a comparable EVAR before and after structured SBT (>4 teaching sessions) were assessed utilising a modified Likert-scale score. These were benchmarked for comparison against the standard set by the consultant body.

CONCLUSION: This study suggests that EVAR-SBT should be considered as an adjunct to standard psychomotor skill teaching techniques for EVAR within the vascular surgery training curricula.

OBJECTIVES: The practice of simulation is currently swiftly developing. It makes it possible for students to carry out procedures in a controlled environ-ment without compromising the safety of patients. Endovascular surgery (EV) is ideal for practice on simulators and many models are currently available. We evaluated the first results of our program in a group of six residents beginning their training in vascular surgery.

MATERIALS AND  METHODS: Our EV simulation program results from a collaborative project with Stanford University (California, USA) which is based on an evaluation of the various sequences composing an EV procedure according to a grid of evaluation comprising approximately 40 items. The procedures are carried out in a realistic environment reproducing a surgical unit. The simulator used was the ANGIO Mentor Suite (Simbionix) equipped with various modules (iliac, superficial femoral, EVAR). Each procedure was filmed using several cameras in order to evaluate the posture and the gestural of the trainees. After each procedure a “debriefing” was carried out so as to reconsider the sequences having generated difficulties and to reinforce the teaching impact. Each resident could take part in eight 2 hours sessions and was evaluated on procedures of increasing difficulty adapted to his skills. The procedures included diagnostic angiography (DA), iliac angioplasty (IA) and superficial femoral (SFA) angioplasty by crossover. At the end of each session, the residents evaluated the teaching content using a questionnaire.

This study was presented at the prize session at the European Society for Vascular Surgery annual meeting, Copenhagen, September 28–30, 2016.

OBJECTIVES: Healthcare evolution requires optimisation of surgical training to provide safe patient care. Operating room performance after completion of proficiency based training in vascular surgery has not been investigated.

METHODS: Thirty-two general surgical trainees were randomised into three groups. Besides traditional training, the first group (n ¼ 11) received e-learning and simulation training (PROSPECT), the second group (n ¼ 10) only had access to e-learning, while controls (n ¼ 11) did not receive supplementary training.

CONCLUSIONS: A structured, stepwise, proficiency based endovascular curriculum including e-learning and simulation based training should be integrated early into training programs to enhance trainee performance.